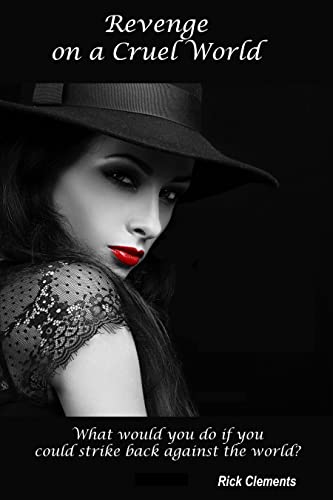 Revenge on a Cruel World

If you thought the Great Depression was bad, think again. How about a computer theft by a mathematical genius that mangles the worldwide banking system, causes a financial tsunami, and threatens to topple governments around the globe?

That’s the main storyline in this fast-moving, action-packed novel.

Note: We received a complimentary digital copy of this book in exchange for an honest review.

Main character Buffy VanderRye is one tough cookie. She had a rough start in life with her drug-addicted mother. But she excelled in school and joined the army, attaining the rank of lieutenant colonel before a sniper’s bullet found her spine and confined her to a wheelchair. Then Buffy’s offered a job of  “solving intractable problems” by Barnett Lay of GFT Solutions. She also gets a cutting-edge mobility device to replace her wheelchair.

We soon find out that GFT has been hired to hack into the banking accounts of a Latin American crime cartel – to the tune of about $140 billion dollars’ worth. The plan has been approved “at the highest levels” (hi, President Carla Lewis) because the Greenleaf Cartel poses “a clear and present danger to the United States.”

The plan is humming along until mathematical genius Harris Harrison decides to put a serious hitch in its get-a-long. Without giving too much away, let’s just say that everything goes sideways from there. Big time.

This is a BIG story with lots of heart. It’ll keep you guessing until the last page with questions like: Who is the mysterious “Lady Q”? (I about fell out of my chair when the identity was revealed.) What’s up with Natasha, Barnett’s main squeeze? What’s going on with the nerves in Buffy’s legs?

There’s also an experimental drug. The Smithsonian Oath. An Article 25 declaration. Russian hackers. The FBI, the Secret Service, and the Department of Treasury. The distinct possibility that the world may end in 30 years, and Carlos Manos, the boss of the Greenleaf Cartel, has lost… Wait. You’ll have to read the book yourself to find that out. And oh yeah, “Where’s the money?” And the missing gold? (Mackinac Island also puts in a “cameo” appearance.” Fans of Somewhere In Time will recall this setting.)

Along the way, there are plenty of rabbit holes. Disappearance acts. Double-crosses and betrayals. There’s also a fair amount of “computer nerd, techno-geek” stuff (“terabytes, VPN, encapsulated and encrypted, information encoding, spoofing the routers” and so on.) It’s not hard to follow. But you’ll need to pay attention and bring you’re A game to keep up in this high-octane thriller.

It takes some time for this novel to warm up and hit its stride. Once it does, however, it’s quite the ride. We’re talking lightning-fast with a chance of whiplash. In fact, the clever plot has more twists and turns than the tilt-a-whirl at the county fair. So you might want to buckle up.

Indeed, Revenge on a Cruel World has a definite Tom Clancy-ish flavor to it. But it’s not exactly an uplifting, gentle read. Parts of it are dark, with scenes some readers may find objectionable. I would’ve scored it higher if they’d been left out or at least dialed back.

2 thoughts on “Action Abounds in ‘Revenge on a Cruel World’”