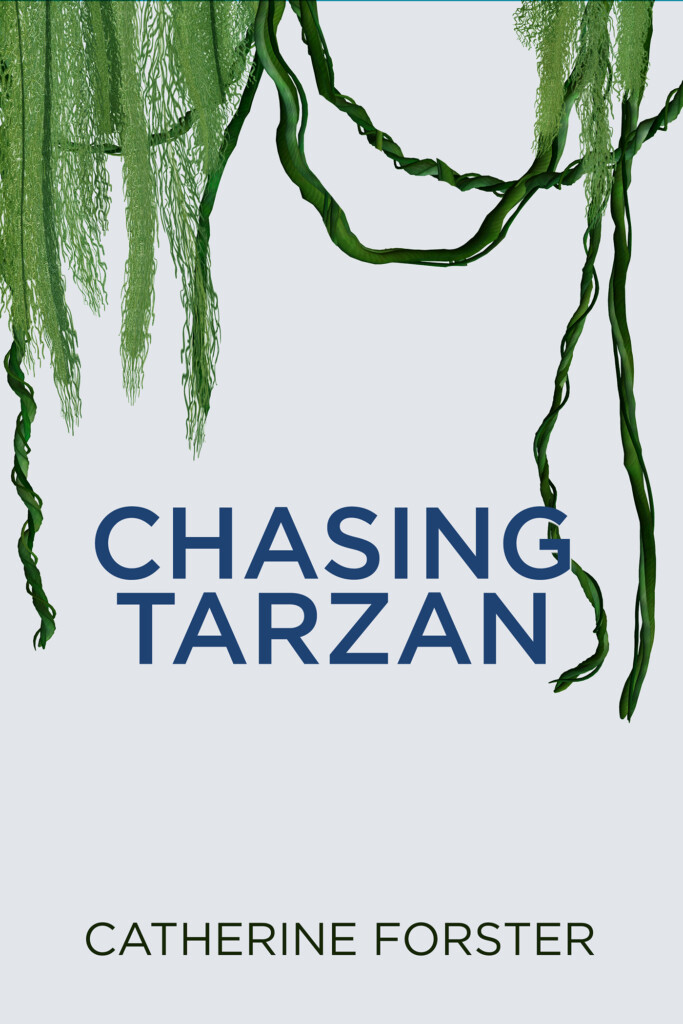 Published by: E.L. Marker, an imprint of WiDo Publishing, 2022

Johnny Weissmuller. That’s the first thing that popped into Mom’s head when we received the blog tour invitation for this book.

Little did we know…

Chasing Tarzan is an intricate and gripping memoir about one girl’s troubled childhood and bullying, both verbal and physical, and how her experience as a foreign exchange student in New Zealand causes her to rethink who she is.

The story unfolds in three parts.

Part One is Tarzan and chronicles Catherine’s growing-up years through childhood and early high school. They include seemingly endless verbal assaults and taunts and the effects of the author’s young and often distracted, frazzled mother of eight.

Part Two is Fleeing the Jungle. Here readers learn how and why Catherine carefully crafts her plans to escape relentless bullying via a student exchange program.

Part Three is Home. You’ll have to read it yourself to fill in those blanks.

In Part One, Boomer Babies will recognize the familiar Mom Advice doled out to Catherine whenever her older brother Steve and playground bully Hunter combine forces to make her life miserable: “Ignore him. He’ll stop.” (Kimber: If I was there, I’d bite those mean kids! But Mom says No. Incidentally, she knew some “Hunters” growing up, too. I offered to bite them retroactively. She still says No. Mom’s just funny that way.)

Feeling unsafe and out of place at home, at school and pretty much everywhere, Catherine retreats inward. She withdraws into a private fantasy world with her hero, Tarzan (Hi, Johnny). No one can reach her there. It’s not until years later when she spends a year in New Zealand as an exchange student that Catherine realizes just how complete her retreat really is – and how she lost so much of herself in the process:

“With time, I became the great disappearer of foe and ally, and, unwittingly, myself. Until New Zealand. Until I was a bonafide member of a family – not a pseudo parent or a perfect daughter.”

In a new country, a new high school, and a new exchange family, sixteen year-old Catherine finds a new version of herself: “Clever and bold.” In “Down Under,” in fact, Catherine’s the “American Exchange Student,” someone great, someone cool, someone fabulous.”

As Catherine’s year in New Zealand winds down, she describes a metamorphosis. While dancing with school Headmaster at a school ball, the author realizes: “I was a different person than the frightened girl who accidentally disparaged him (the Headmaster) nearly a year ago. I didn’t need his apology or approval. When the music stopped, we parted graciously, our chapter closed.”

Catherine’s simmering resentment toward her Mom also begins to melt while in New Zealand. Of her Mom’s letters, the author writes, “She (her mom) included me not as her maid, her babysitter, or her ally, but as me – her daughter.”

This book has much to offer: Honesty and authenticity. Angst and anxiety. Disappointment and heartbreak. Tears and triumph. Love, laughter, and family. An in-depth look at the effects of bullying. All wrapped in an articulate and tightly written narrative that’s as bright as a Washington sunrise after months of rain.

Solid and sturdy, this highly engaging coming-of-age tale is hard to put down. It’s tough, tender, and effervescent, and features an impressive command of the language plus careful attention to detail.

Chasing Tarzan pulls no punches. It includes reportage of “acerbic drivel,” “predatory insults,” and the like. This is balanced with honest introspection and personal reflection amid vibrant settings, lively descriptions, and warm remembrances. Equal parts guts and grace, Chasing Tarzan opens a window into the heart and soul of a bullying survivor, offering a hand up and out of the jungle.

Indeed, this rich and remarkable memoir ends on a high note of hope, summed up in the author’s Supplemental Thoughts (page 273-74):

”To my readers, know you have the potential to change a child’s trajectory; and to those who have suffered bullying, know that this was abuse, and you are a survivor.”

“Most indubitably.” (You’ll get that if you read the book.)

Catherine Forster honed her powers of observation early on, and later applied them to artistic endeavors. Although it didn’t happen overnight, she discovered that seeing and hearing a bit more than the average person can be beneficial. As an artist, her work has exhibited in museums and galleries across the United States and abroad.

Her experimental films have won accolades and awards in more than thirty international film festivals, from Sao Paulo to Berlin, Los Angeles to Rome, London to Romania. Through her work, she explores the dynamics of girlhood, notions of identity, and the role technology plays in our relationship with nature.

In her capacity as an independent curator, she founded LiveBox, an eight-year project that introduced new media arts to communities at a time when few new what media arts was. For the past four years she has been a member of the curatorial team for the Experiments In Cinema Film Festival held annually in Albuquerque, New Mexico.

She received a Masters of Fine Arts from the School of the Art Institute of Chicago, a Masters of Business from the London Business School, and a fellowship in writing from the Vermont Studio Center. She is also included in the Brooklyn Art Museum’s Elizabeth A. Sackler Center for Feminist Art.

Purchase a copy of Chasing Tarzan on Amazon, Barnes and Noble, and Bookshop.org. You can also add this to your GoodReads reading list.

4 thoughts on “‘Chasing Tarzan’ Swings Thru Jungle of Emotions”