That means it’s time for another Book Beginnings and the Friday 56!

Book Beginnings is a meme where readers share the first sentence (or couple of sentences) from their current read. It’s hosted by Rose City Reader every Friday.

We’re featuring two books this week. Our Book Beginning is from Kate Morton’s Downton Abbey-ish The House at Riverton (Washington Square Press, 2006). Our Friday 56 is from The Road Home by Richard Paul Evans (Simon & Schuster, 2019).

From The House at Riverton:

“Last November I had a nightmare.

It was 1924 and I was at Riverton again. All the doors hung wide open, silk billowing in the summer breeze. An orchestra perched high on the hill beneath the ancient maple, violins lilting lazily in the warmth. The air rang with pealing laughter and crystal, and the sky was the kind of blue we’d all thought the war had destroyed forever.”

The House at Riverton is the latest clunker to land on my DNF list. It’s showing up in Book Beginnings so you don’t have to bother with this slow-as-molasses-in-summer skunker. Stilted, silly characters with a stultified story. Kept hoping it’d get better. It doesn’t. Bailed at around page 250.

And to think I could’ve watched paint peel instead. Zzzzzzz. 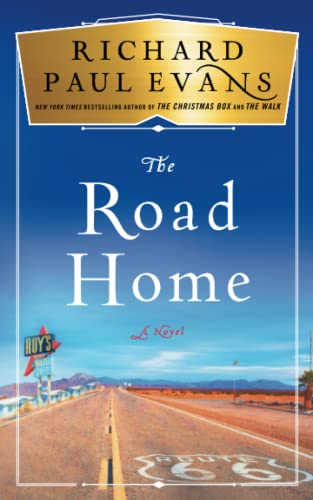 From The Road Home:

There were too many quote-worthy portions of this novel to limit it to one or two lines from a single page. Here’s a brief sampling:

“There’s a reason you didn’t die on that plane.” …

For too long I’ve bought expensive clothing, hoping it would cover up a second-rate soul….

“How can I make your day better?”

… to lose your life is to find it. That’s it. The greatest self-interest is, simply, an interest in others.

About The Road Home:

Chicago celebrity and pitchman Charles James is supposed to be dead. Everyone believes he was killed in a fiery plane crash, a flight he narrowly missed. But thanks to that remarkable twist of fate, he’s very much alive and ready for a second chance at life and love.

The Road Home is the dramatic conclusion in the Broken Road trilogy—a powerful story of redemption and “finding happiness on a pilgrimage across iconic Route 66.”