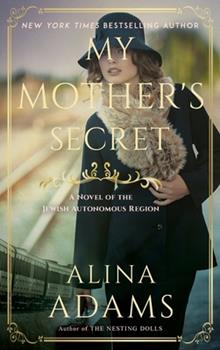 My Mother’s Secret: A Novel of the Jewish Autonomous Region

We only need to learn how to wait

We must be calm and stubborn.”

The story is told in three parts. Part I covers 1935 to 1940. Part II focuses on 1917 to 1945. Part III returns readers to the not-so-distant past of 1988 and Gorbachev’s perestroika. The bulk of the story focuses on Part II and Regina’s life in the USSR.

Leaving Moscow, she’s thought it was over. She’d thought she was safe. Only to realize it was just the beginning of something far worse.

After her husband’s death in 1988, Regina looks back and slowly reveals bits and pieces of her past to her daughter. It includes Stalin’s purges, Siberian gulags, World War II, the frozen Eastern Front, a German P.O.W. Stalag, fear, repression, hope, and immense personal sacrifice. Also listening to one’s own judgment “instead of ceding it to somebody else.”

As Lena listens, stunned, she suddenly realizes ”she’d never known her mother at all.”

Young Regina flees Moscow during Stalin’s reign of terror. A half-step ahead of the dreaded NKVD, Regina runs to Birobidzhan. She has high hopes for the socialist autonomous Jewish community until toiling in the fields in primitive conditions throws a cold splash of Reality on her dreams. But it’s not all bad.

Here she meets the dashing, kind-hearted Aaron Kramer. He’s head of Regina’s agricultural detail. The pair falls in love. The romance blossoms into a marriage proposal. But Aaron has also drawn the ire of Birobidzhan’s Soviet leader, Felix. Regina has caught Felix’s eye as well. In a fit of jealousy and rage, Felix “arranges” for Aaron to be transferred to the Red Army and the Eastern Front.

Regina refuses to leave Aaron. She exits the community, joins a medical unit, looks for and finally reunites with the love of her life. A baby is born. Then Aaron’s unit is transferred. Shortly thereafter, word reaches Regina that her beloved Aaron has been taken prisoner by the Germans. Undaunted, Regina makes up her mind to find him and bring Aaron home. Can she? And at what cost?

Forty years later... Oh, wait. You’ll have to read the book yourself for that.

Fascinating and deeply immersive, My Mother’s Secret is a compelling love story set against the sweeping backdrop of the old Soviet Union. Think Doctor Zhivago meets Fiddler on the Roof meets Exodus. With snow. Lots of snow.

Rooted in a little-known chapter of Soviet history, My Mother’s Secret is a powerful story about the unbreakable bond between mothers and daughters. It’s also about consequences, the beauty of hope, and choosing wisely.

Alina Adams was born in Odessa, Ukraine, and immigrated with her parents to the U.S. in 1977 at age seven, where she learned English by watching American soap operas at their home in San Francisco.

Alina is a fiction writer and television producer. She founded Alina Adams Media in 2011 to help other published authors turn their books into Enhanced E-Book titles, and serves as a consultant to other authors.

Alina lives in New York City with her husband and their three children.

2 thoughts on “Why ‘My Mother’s Secret’ Will Melt Hearts”