Anywho, we’re in the process of reading our way through some “Best Of” historical fiction lists found elsewhere. We wanted to see for ourselves what titles are worth the time and what belongs in the kitty litter box. Cuz ya know, just because a book or author is a popular “best seller” doesn’t necessarily mean it’ll pass Kimber and Mom Muster.

Yea, verily. No one wants to waste their time on lousy snoozers with stale, brittle plots that are as predictable as tomorrow’s sunrise. Or populated with one-dimensional, cardboard characters we don’t know, don’t want to know, and could care less about, no matter how many accolades they get elsewhere. Cuz we’re like, picky.

So here’s our Totally Unscientific, 100% Subjective take on a few recently read historical-fiction titles. Plus one plain fiction title we’re throwin’ in for free. Cuz we can. (You may want to buckle up. Just sayin’). Ready? Set? Let’s GO!

Girl With a Pearl Earring

First off, the writing is excellent, almost luminescent. It swiftly and expertly draws us into the world of seventeen year-old maid, Griet, and 17th century Holland. Griet is the supposed subject of one of Vermeer’s most famous paintings, Girl With a Pearl Earring. Aka: “the Dutch Mona Lisa.” Griet works as a maid in the Vermeer household.

But the plot is as predictable as the seasons, with characters straight out of Central Casting. Kindly pass the No Doze.

I am haunted by humans.

Okay, okay. One of us Who Shall Remain Nameless finally admitted she’s never actually read the entire book cover to cover before (hi, Mom!). Excerpts, summaries, reviews, yes. The movie? Yes. But not the entire book. Until recently.

Trying to make sense of the horrors of WWII, Death relates the story of Liesel – a young German girl, whose book-stealing and story-telling talents help sustain her family and the Jewish man they are hiding, as well as their neighbors.

Brilliant. Epic. Staggering in its breadth and depth. Someone is like, totally kicking herself for not discovering this gem sooner. Better late than never. (Hi again, Mom!)

Yea, verily. Having a drop of royal blood in your veins in 15th century England is extremely hazardous to your health in this fascinating account of Lady Margaret Beaufort Stanley, heiress to the red rose of Lancaster. Told in the first person through the cunning, crafty, “pious” and manipulative eyes of Beaufort, this is a book rich in history and court intrigue.

Margaret Beaufort fervently believes that her house is the true ruler of England. Mocked by her mother, ignored by her cousin Henry VI, and stuck in three loveless arranged marriages – the first at age twelve – Beaufort fancies herself a modern day Joan of Arc. Convinced that her son Henry is the rightful heir to the throne via the House of Lancaster, she plans and plots and conjures up all sorts of boil and bubble, toil and trouble in order to get Henry on the throne of England. There’s tons of treachery, betrayal, imprisonments and executions along the way.

This book has it moments. The final chapters are particularly engrossing. But aside from being a self-absorbed, scheming and conniving jerk, Margaret radiates all the warmth of the Polar Ice Caps. Hand me another blankie! And some Excedrin!

The Note Through the Wire: The Incredible True Story of a Prisoner of War and a Resistance Heroine

Based on a true story inspired by the author’s own family, The Note Through the Wire is a compelling blend of history and romance set during World War II. The story unfolds in alternating chapters as told by both Bruce and Josefine.

Fighting for the New Zealanders in Greece, Bruce is wounded and captured by the Germans near Corinth. He spends the next four years in a German POW camp. Farmed out to work on a farm, he eventually meets Josefine. A Slovene partisan, she’s in hiding at the farm after a close friend betrays her anti-Nazi activities to the Nazis.

Woven throughout two tales of great bravery is the remarkable story of two ordinary people who find an unexpected love that overcomes war, distance, and the unimageable hardships of German-occupied Europe during WWII.

“I intended to write this book twenty years ago,” says the author in the Acknowledgements.  He goes on to explain that the two main characters, New Zealander Bruce Murray and Slovene Josefine Lobnik, both died before their memoirs were ever recorded. So he reconstructs the story of how their love blossomed behind barbed wire during WWII via other sources.

A page-turner, for sure! 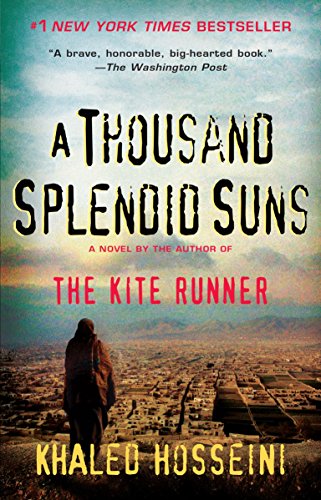 We know this author from The Kite Runner, which was both heartbreaking and hopeful. A Thousand Splendid Suns runs in the same vein, with a key difference: this story centers on two women, Laila and Mariam. It spans some thirty years and is set largely in Kabul.

The women share a deep “kinship” via shared loss, grief, and suffering. They understand each other. They also manage to eke out lives of dignity in a harsh environment within a country shattered by war, deprivation, and violence, both personal and political. (Can we just say for the record that “Rasheed” gives skunks a bad name?)

Chronicling the volatile events of three decades of Afghanistan history, including the Soviet invasion, the Taliban and post-Taliban rebuilding, A Thousand Splendid Suns is a powerful, poignant story of family and friendship. Well worth the read.

Not “historical fiction,” but we’re gonna wedge it in here anyway. Cuz we can: 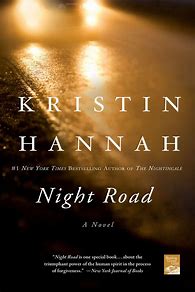 Ever drive into a mountain of over-hype? Where prior reviews gush praise like a geyser, sending expectations into the stratosphere? Then you actually start reading. And… thud.

That’s what Night Road is like. Yes, it’s “emotionally gripping.” Yes, the writing is top-notch. (Everyone else is pretty much dryer lint.) But this is another story that’s pretty predictable. And that high school Drama Queens on Steroids stuff only goes so far.

It also leaves some loose ends dangling. Like, what’s up with young Grace’s “imaginary friend,” Ariel? Where did that come from and who’s the voice? Whatever became of the frosty relationship between Judith and her art gallery-boss Mom, Caroline? It thaws a little by the end of the book, but you’re left wondering what happened next.

Spoiler: the sturdiest characters in the whole story are Lexi’s Aunt Eva and attorney Scot Jacobs.

The story also feels contrived at times. Like the author is trying so hard to manipulate readers’ emotions, she’s practically beating you upside the head with dryer lint. Or… something.

We expected better from an author of Hannah’s caliber. Ho-hum.

Three women living in three different centuries face hope and heartbreak on the frigid shores of Lake Superior in a novel that would be more accurately titled Ode to Incoherence. As in, Well, that’s three days out of my life I’ll never be able to get back.

What’s interesting is this novel had a lot of potential, with strong writing and lyrical prose. Too bad it’s wasted on a plot that has the consistency of burnt pudding.

What have you read lately that you saw differently than The Crowd?