Mom’s idea for an intro, spake I, Kimber the Magnificent. So don’t blame me, okay?

Anyway, today I’m almost as excited as when I get an extra strip of nice, crispy bacon! Cuz we’re introducing you to one of our favorite new authors, Rick Rogers “The Hiking Guy.”

We recently reviewed Rick’s magnum opus, Walking Home. It’s about his adventures and misadventures along the Pacific Crest Trail (PCT). Easily one of the most engaging and entertaining books on the subject we’ve ever come across, Walking Home earned our highly coveted 5-star ratings. (Read our full review here. It’ll open your eyes as well as tickle your funny bone.)

We enjoyed Rick’s book so much, we didn’t want it to end. So we asked if he’d be interested in writing a guest post. Rick kindly agreed. So here’s the better-than-bacon part: It’s Write Here! (That’s not a typo. In case you’re wondering.)

So pour yourself a nice big glass of whatever. Sit down and take a load off. Kick back and get ready for a behind-the-scenes glimpse into how and why Walking Home came into being. Take it away, Rick!

Rick, we enjoyed reading your book.  How did Walking Home come about?

When my son’s teacher heard I was planning to have my boy along on portions of my Pacific Crest Trail hike, he bought me a book about another father-son duo that had done the PCT.  It was a thoughtful gift but virtually unreadable.  It was a log of miles walked, what they ate for dinner each night, and very little else.  But it got me thinking:

“Wouldn’t it be cool if my kid could do a book report on a book that he was in and that his dad had written?” 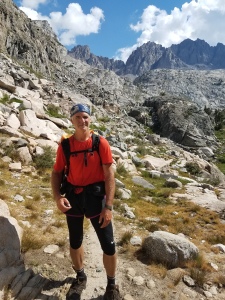 I’d wanted to hike the PCT for a long time.  But about twenty years ago, I read a couple books that almost changed my mind.  Escape From Kathmandu by Kim Stanley Robinson tempted me to trek through the Himalayas.  Then, A Walk in the Woods by Bill Bryson almost steered me onto the Appalachian Trail.  Both had beautiful settings, but what made them great, I think, were the fun characters and the joy they brought.  I wanted to hike with them, even if it was raining or they had to pull leeches off themselves.

And then, just before making the hike, I read The Kindness of Strangers, by Mike McIntyre.  It’s an account of hitching across America completely penniless.  There’s no way I’d want to travel with him, but the characters and the way they came into the story made the book memorable.

So during the hike, those three books were on my mind.  I journaled on my phone in the tent each night, taking the characters as they came, like in the Kindness of Strangers, but sprinkled with some of the joy and whimsy of the Bryson and Robinson books.

Walking Home is built from those trail notes.  I made dozens of rewrites and upgrades to the manuscript before I thought it was acceptable, and then I sent it to an editor for a professional opinion.  He sent it back with twenty-two pages of notes.  I called him back.

“Scott!  What were you doing? I told you to quit reading if it was bad.  I can just do a slide show about the hike and forget the book thing, you know.”

“Yeah, I know, but it’s good.  It’s good enough that it’s got to be better.  You have to do another re-write.  And this time, give yourself a drug problem or have an affair or something.  More personal drama, you know.”

“Just a suggestion.  Get back to the keyboard.”

So I got back to the keyboard, did yet another rewrite, sent it back to Scott, and got just two pages of notes back.  Cleaned up a few things, copy edited, formatted, and finally- published.  Whew!

Tell us what you learned about yourself and others on the Trail.

What surprised me most was the diversity of personalities on the Trail.  Hiking continuously, day after day just isn’t everyone’s idea of a good time, so I reasoned this would impose a filter of sorts, that people would strongly self-select for the adventure.  I fully expected that the people I’d meet, most of them anyway, would think mostly the same thoughts and form the same opinions as I did.  Seems stupid in retrospect, I know.  But really, it’s so much better that I was wrong.

What do you hope readers take away from your book?

I’m not an exceptionally organized person, and my writing isn’t very tightly structured either.  I admire books like The Highest Tide, where theme permeates and enhances every scene, but when I try it, the pages come down with a case of the clunkies.  I don’t have the skill, or discipline.

When I was a dairy farmer, I had this big machine shed, and inside were work benches that were so roomy I didn’t have to bother with organizing.  Parts and tools were out in the open, rarely more than a layer or two deep, and easy to hand. If I needed to fix or build something on the farm, I’d push a wheelbarrow along the work benches and drop in whatever I needed for the job.  I miss that machine shed. 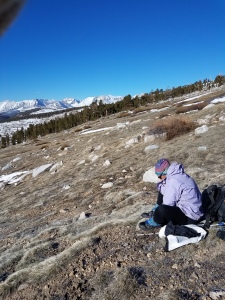 Anyway, I think reading a book should be like pushing a wheelbarrow through that shed.  And if the story is a good one, and the pace is brisk, parts and tools, ideas and images drop into your wheelbarrow almost unnoticed. And when the story is done, and you look down and take stock of what you’ve collected, hopefully you’ll have something useful in there, or at least worth keeping.

Since I’ve gotten back from my hike, we’ve all been living through some awesomely excruciating history.  And it’s become more obvious than ever what damage smugness and casual ‘othering’ of our fellow humans can wreak.  Really, curiosity and kindness matter and I hope I’ve left enough of that lying on the workbenches to end up in readers’ wheelbarrows. 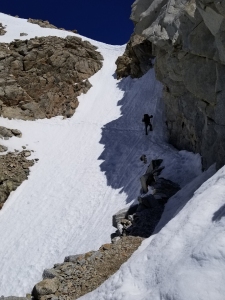 Do you have plans for another hike?  Another book, perhaps?

I’m itching to get out to hike the English Coast Path and write about that.  It’s a new trail, some 2,700 miles all around the coastline of England.  It was supposed to be opened last year, but Covid tossed a wrench through it and it’s been delayed.  But I’ll be heading over soon!

The Kindness of Strangers