Death at the Abbey 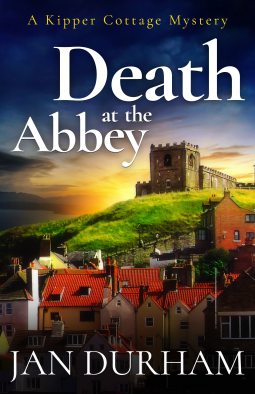 A medieval religious artifact. A budding romance.  A middled-age widow and amateur sleuth who wonders if there’s a connection between two murders, and why? And who might benefit from a religious relic with healing properties?

Liz McLuckie’s husband died five years ago. Working through her grief, she’s neck-deep in renovating two dilapidated old cottages in Whitby on the North Yorkshire Coast. Out walking her faithful bull terrier, Nelson, at a cliffside Benedictine Abbey one morning, Liz stumbles upon a dead body. She later discovers that a break-in occurred at the church the same night as the body showed up. Coincidence or not?

The plot thickens when Liz is convinced that a medieval artifact, a “girdle,” is connected to murder. But can she prove it? And what happened to the girdle? If the murderer doesn’t have the relic, who does? And what’s up with the long blonde hair on the hairbrush in the dead man’s cottage?

As suspects wander in and out of Whitby, so do Liz’s doubts and suspicions. Did a professor really steal a priceless museum artifact and get killed for it? Or is something else going on? What? Can she unravel the clues before she becomes the murderer’s next victim?

Solid writing undergirds a supple storyline salted with surprise twists and sturdy characters. These include:

But it’s Nelson the dog who steals the show.

Some of the British lingo may be a bit confusing for non-British readers. “Kirtle”? “Agas”? “Tagine?” “Cladding”? And isn’t “inglenook” a winery in Napa? But this isn’t a major problem, as meanings can be easily deduced by context.

Fraught with loss, love, resilience, and a touch of wry wit, this cozy mystery will do nicely with a hot cuppa or another game of mah jong.

Death at the Abbey is Book 1 in the Kipper Cottage Mystery Series. Book 2 in the series, Death at Neptune Yard, is now available.

Jan Durham lives just outside Edinburgh with her husband, three kids, a one-eye whippet, and a fat black pug. Born in a colliery village in the North East of England, she cut her literary teeth on the great storytellers of the 60’s and 70’s – Wilbur Smith, Frank Yerby, Mary Renault, and Sergeanne Golon. She began her writing career as an advertising copywriter and has since had novels published by Random House and HarperCollins, and original audio series produced by Audible UK. She also writes for tv.

Jan enjoys psychological thrillers and crime fiction of all kinds, from the coziest of cozies to the blackest of noirs.

Death at the Abbey is her first cozy mystery in the Kipper Cottage series with Inkubator Books. Book 2 in the series, Death at Neptune Yard, is also available now.

4 thoughts on “Cozy Up With ‘Death at the Abbey’”