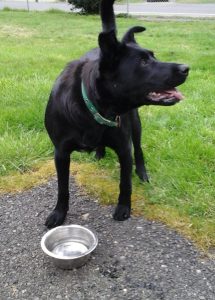 Mom and I? We get it. We’re supposed to go gaga over every new Kristin Hannah novel that comes down the cat. Yes, Hannah is one of our favorite writers. She proves her mettle once again in The Great Alone. So what happened with The Four Winds?

“Love and fear. The most destructive forces on earth.”

Buckle up for another fast-paced roller coaster ride of emotion and revelation in this gripping, powerful story of survival, in two kinds of wilderness: human and outdoor.

Set largely in a tiny frontier town of Kenaq, Alaska and Seattle, Washington between 1974 and 1986, The Great Alone packs a punch.

As is the case with other Hannah stories, The Great Alone can be read as a story within a story. Or as two survival stories.

One story traces the lives of the Allbright family – Vietnam vet and former POW Ernt, his wife, Cora, and their daughter, Lenore “Leni.” Home from the war, Ernt loses yet another job. He suddenly decides to move the entire family lock, stock, and barrel to a cabin in the Middle of No-wheresville, Alaska. On the remote Kenai Peninsula.

But Ernt’s inner demons catch up with him. They spill over onto everyone, especially during Alaska’s dark, brutal winters. Soon Tom Walker, a successful land developer, is the target of Ernt’s raging hatred and smoldering violence. When Leni becomes romantically involved with Tom’s son, Matthew, trouble isn’t far off. When it arrives, it does so in spades. Can their love survive? Can they survive?

The other story is about survival in the back of beyond. Where families and futures are fragile. Where character is revealed and the human spirit is put to the test in harsh conditions within a harsh, unforgiving environment. Where you can make one mistake. But the second one will kill you.

“I think you should stand by the people you love.”

At its core, this is a love story. Love for the untamed wilderness. Love for solitude and independence. Teenage love that goes horribly wrong. Maternal love. Love between sisters and girlfriends. Twisted “love” that makes excuses. Fear that fakes love but swallows you up like quicksand. Toxic relationships rotting from the inside out.

Hannah books often reach deep into your heart, pull it out, turn it upside down and inside out. Then shake it. The Great Alone is no exception. After turning the last page, you kinda have to take some deep breaths to get your legs back under you. And wait for the world to stop playing pin ball.

Most readers probably think young Lenore “Leni” Allbright  and/or her long-suffering mom, Cora, are the protagonists of this story. I don’t. The real star of this show that seeps through every paragraph and most every page is Alaska, the Great Alone. 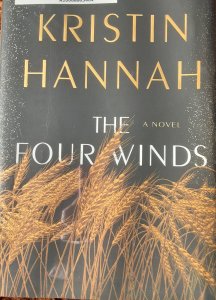 That Dust Bowl/Great Depression/Mass Exodus from the Great Plains to the West Coast has been done so many times. By so many people. (Hi, John Steinbeck.) And so much better.

So The Four Winds is pretty flat. In fact, this is probably The Worst Hannah book we’ve ever read. This hunk of junk makes flossing look exciting.

Though well-written, the narrative about the trials and travails of Elsa Wolcott Martinelli, her Texas upbringing and exodus to California as a migrant worker during the Depression, seems stale. Brittle. The tone is strident and Pecksniffian. Like the author’s trying too hard. (Okay, lady. We get your ideological underpinnings. We got ‘em the first 6,792 times you beat us over the head with ’em, okay? Give it a rest already.)

There’s also a strong streak of cynicism and P.C.-ness running through the text that tastes like a rehashed Texas dust storm. Wooden, dull characters do little to enliven a plot that’s so anemic and predictable, it collapses in on itself like a sagging tent in a flash flood.

There’s nothing “brave” about this bloviating bumper crop of bovine scat. It’s boring. Tedious. Badly overwritten in places. After 360 pages (out of 448), we were done.

And to think we could’ve watched grass grow instead.

Moreover, this mawkish tome breaks one of our cardinal Don’t Tick Off Mom rules about using fiction to deliver political sermons. It also fits pretty well into How to Get a Lousy Review in One Easy Step.

So don’t even go there. We don’t care how rich or famous you are, authoroo. Or how many weeks you’re on the NYT Bestseller’s list. Pull any of that crap here and Mom’ll nail ya.  Like this:

The Edge of Nowhere, by C.H. Armstrong. Read our review here.

Out of the Dust, by Karen Hesse

Children of the Dust Bowl: The True Story of the School at Weedpatch Camp, by Jerry Stanley