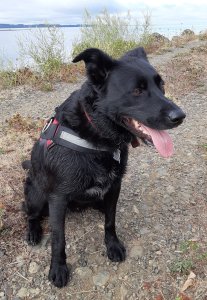 Kimber here. Mom and I are delighted to share a guest post by the author of one of our favorite books, Walks With Sam. Sam is a dog. A very astute, reflective dog. Ya know. Like me. In fact, I think Sam’s my new best friend!

Anyway, in this guest post author David W. Berner “walks” us through why and how he wrote this rich and wonderful memoir about contemplative walks with Sam. (Psssst! It started with a blog. No kidding!)

Walks With Sam will be officially released tomorrow, September 1! Don’t forget the virtual book launch on September 13. Details below!

Take it away, David!

More than two years ago, I had an idea. What would it be like to reinvent the dog walking experience? Not so much for my doodle, Sam, but for me. All the experts say walking is a meditative, contemplative endeavor. Ask any of the great walkers—Henry David Thoreau, Charles Dickens, John Muir. But this time, what would it be like if the dog led the way? What if Sam was my guide?

It was a new time in my life, a chapter change, if you will. My only sibling, my younger sister had recently died after a long battle with alcoholism, my mother and father had died years before, and now I was what remained of the family of my youth. What is one supposed to do with that? I was also turning 60, a milestone age, and considering what would come next, how might I move in the world in my final years. A sabbatical from my position at the college where I teach had given me some freedom, and although I had projects to complete—a manuscript to finish and edit—I decided that I would dedicate myself to daily walks to allow my mind to find balance. And Sam, my young dog, would join me. She, too, needed those walks.

There were a few things to determine: Where to walk, how long, and what would be the end purpose? After the very first walk, I dismissed those questions and determined that it would be best and most important to disregard any preconceived ideas of what the walks should be. Instead, I would have no destination, no timeframe, and no map. I would leave the phone at home. And in the end, I would allow the walk, and more notably, Sam, to set the tone.

Dogs have no true sense of past and future, not like we do. They truly live in the present; they are the most mindful of domesticated animals. Mindfulness is not so easy for humans, but for dogs it is only natural. Knowing that, I would let Sam be my shaman.

It Began as a Blog

As a way to reflect on the walks, I began a blog, one I never expected many to read. It was a way to document and contemplate what each walk would bring to me and to Sam. After a dozen or so posts, some readers wondered if this might be the beginning of a new book. I had not considered that at all. It never entered my mind. What had become clear, however, after dozens of walks over a spring, summer, and early autumn, were the themes that continued to arise—family, tolerance, neighborhood, aging, legacy, nature, and what we can learn from our pets, for they are the ones that remind us of how so very human we all are.

So, I got to work. Took those blog posts and wrote them in a manuscript form, shaped and edited, reshaped and tweaked. In time, I had what I thought was something to be shared. Walks with Sam: A Man, a Dog, and a Season of Awakening will be released officially this fall (Sept. 1) in paperback, e-book, and audiobook. We plan a virtual book launch, open to all, on September 13. Here’s the link for the book launch event: http://evite.me/d9nPQP8bns

A Writing Flurry (thanks, Sam!)

In the months after Roundfire Book, UK accepted my manuscript, I began a flurry of writing. I had always been a fast and daily writer, one who always had something brewing, but this was quite different. This time, I began several projects at once, something I had never done before—a new novel, a memoir, a novella about golf, and a project that I now know had been waiting for me to tackle, a project I may never have begun with out those walks with Sam.

For years I have been attempting, and only marginally succeeding in bits and spurts, to write about sister and what had became a tragic end to her life. I was blocked and reluctant, even frightened to take it on. But now, at this writing, I am more than 8000 words deep into a story about her, her life, her struggles, and how a family copes, denies truths, and how they learn to heal from the loss and the challenges of living. Sam helped me get here. The walks with her permitted my mind and all those scattered, uneven pieces of thought to find their place in a larger, complicated puzzle.

Sam and I still attempt to get out together often, although our walks are not as frequent as they should be. But when we do, we fall right back into the steps we took during that season of awakening, matching the footprints we left behind. 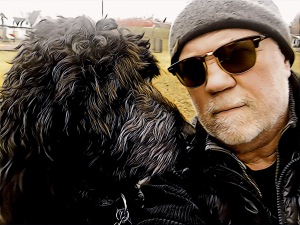 David W. Berner is the award-winning author of eight books of fiction and memoir. He has been the writer-in-residence at the Jack Kerouac Project at the Jack Kerouac Home in Orlando, Florida, and at the Ernest Hemingway Birthplace Home in Oak Park, Illinois. He lives with his wife and his dog outside Chicago.

2 thoughts on “GUEST POST: A Behind-the-Scenes Look at ‘Walks With Sam’ With Author David W Berner”