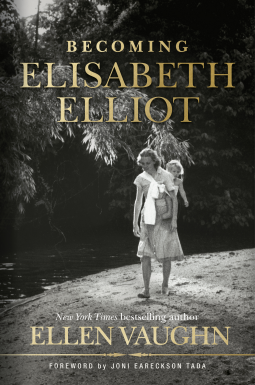 These are the foundational questions that book-ended the life of one of the most influential Christian women of the century. They also undergird Ellen Vaughn’s eloquent and articulate biography, Becoming Elisabeth Elliot.

An absorbing, highly engaging biography of a complicated and multi-faceted wife, mother, missionary, and prolific author and speaker, Becoming takes us on a fascinating look at the events, experiences, and people who helped shape the life of this remarkable woman.

Meticulously researched and thoroughly documented, “Becoming Elisabeth Elliot” draws on Elliot’s own journals, letters, and other writings for a candid look at Elisabeth’s upbringing, her years at boarding school in Florida, student life at Wheaton College, and early years as a wife and missionary in the jungles of Ecuador. It also provides an overview of Elisabeth’s courtship and marriage to Jim Elliot. He was later martyred by the Waodani of Ecuador. (They’re identified by anthropologists as “one of the most homicidal tribes ever studied.” By the 1950s, in fact, Waodani tribe members were spearing each other to the point of extinction.)

The book has two basic parts. The first part of Becoming skillfully interweaves the true story of this tribe with the lives of five young missionaries who dared to believe the Waodani could change their story. They dreamed of introducing the love of Jesus Christ to the tribe. The missionaries, including Elisabeth’s husband, Jim, paid the ultimate price for their dream when the Waodani speared all five men to death in a jungle river in 1956.

It galvanized the Christian missions movement of the second half of the twentieth century.

Steeled by grace, Elisabeth later went into the jungle with her young daughter to live with the people who killed her husband and his colleagues. Elisabeth and other women shared the gospel with the Waodani, who saw a new way to live.

A complex personality with a “formidable” mind – she often read Plato and Socrates in the original Greek – Elisabeth also had a sharp eye for the Truth. She “wrote what she saw, not what she was supposed to see.”

The author also notes that Elisabeth saw dying to self and taking up her cross to follow Jesus as a biblical mandate to obeyed. Period. That’s why her biography “reflects the life and deaths, plural, of Elisabeth Elliot” and follows Elisabeth’s conviction that it is only in dying that we find real life. It paints a vivid word picture of “reckless abandon for God” and the “radical freedom” that comes with it. And that is why Elisabeth Elliot’s story is still relevant today.

The second half of the book shows us an older Betty. This “seasoned” Betty doesn’t like easy, formulaic answers or empty, knee-jerk platitudes. She’s lonely. Frustrated. “Intense, sensitive and possessive.” She battles feelings of failure and uselessness. She chafes at clichés and trite responses. Feels isolated. Asks hard questions. Grieving, Elisabeth is sometimes all sharp angles and edges.

Additional tidbits include Elisabeth’s “deep-seated love of tidiness” and aversion to disorder, which she considered slothful. (“The wages of sloth are dust.”) Difficulties in deciphering the Waodani language. Personality clashes.

Much of the last half of the book chronicles events we don’t often hear about: Elliot’s thorny relationship with Rachel Saint, Nate Saint’s sister. Dayuma’s volatility. Trouble with the “locally infamous” and mentally unstable Dr. Tremblay. Betty’s disaffection with the policies of another missions entity. Tensions between various mission groups in the area.

Additionally, the title, Becoming Elisabeth Elliot, is a play on words. Elliot was known to friends and family as “Betty.” She “became” known to the world as “Elisabeth” after penning Through Gates of Splendor. (The origins of both the text and title of Gates are explained in Vaughn’s book.)

Beautifully written and deftly paced, Becoming Elisabeth Elliot is bracing and inspiring without being preachy. The narrative is insightful, informative, and as no-nonsense as Elliot herself. It offers keen insights into the how and why of a life totally committed to seeking and obeying God’s will.

You won’t find any “Saint Elisabeth” in these pages. In fact, Becoming avoids canonizing Elliot while presenting a candid, compelling read. It chronicles Elisabeth’s doubts, struggles, short-comings and uncertainties alongside her faith, commitment, and courage.

Becoming Elisabeth Elliot is also a poignant love story full of pathos and power, both divine and human. Nimble and refreshingly balanced, it’s a potent read that’s as timely as today’s headlines. By the end of this book you’ll find not only a deeper understanding of the forces that shaped Betty Elliot into “Elisabeth Elliot,” both external and internal, but a deeper walk with the Faithful Shepherd who led her.

May Betty’s story strengthen your own.

I first read Elliot’s best-selling classic, Through Gates of Splendor, some 40 years ago, shortly after meeting Elisabeth Elliot at a missions conference at my alma mater. Articulate and profound, Elliot remains a perennial favorite. She’s not afraid to ask the Tough Questions. She does not offer pat answers. I am well familiar with Elliot’s work, having read almost everything she’s ever published. So…

While Becoming Elisabeth Elliot can be read as a stand-alone, readers already familiar with Elliot’s work will likely benefit most from this finely crafted biography. Readers would also do well to park any pre-conceived notions or lists of demands at the curb. Let the text speak for itself instead of second-guessing or assuming.