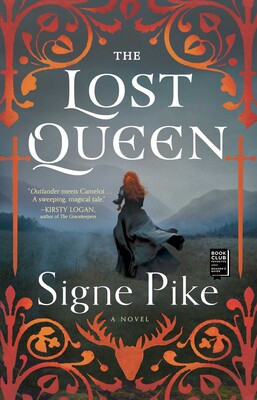 Intelligent, independent, and passionate, Languoreth must follow in her mother’s footsteps, which means no freedom and few choices. Daughters of kings must marry kings. They can’t become keepers, as Languoreth prefers. And she can’t become a warrior. But the young princess still has the power to fight. We may not always have the choice we like, she observes. But we always have a choice. Or so readers are told. About 9 million times.

So Languoreth is destined to marry a stranger, a man she doesn’t love, for the safety and security of her people. Bummer. But that doesn’t stop her from pursuing a romance with Maelgwn, one of Pendragon’s generals. (We get it. We got it the first 4,873 times it was mentioned, okay? Can we move on?)

The style is reminiscent of T.H. White, with excellent world-building. The prose is as rich and redolent as woodsmoke and pine. The descriptions are also good, but sometimes threaten to overwhelm the central character and run her into the woods.

Additionally, it takes a while for this story to get rolling. The initial chapters – like, ten – are replete with rituals, kennings, bannock, feasts and festivals, Dragon Warriors, her father’s health, flora gathering and Midsummer whatevers. It’s like the author’s trying to impress us with her deep dive into ancient Scottish lore. Or… something. The unfortunate result is that it takes close to twenty chapters for this thing to gather any real steam.

I really wanted to like this book. It has its moments. But it meanders too often, moving with the alacrity of a three-toed sloth. It’s also yawningly repetitive in places.

The title is also a bit misleading. As Languoreth’s story winds down with a war in which family members are pitted against other family members, her husband’s ascension to the high king’s throne is still in doubt. Ditto her status as “queen.”

That’s kind of a gyp. Especially since readers spent the last 9,358 pages (or so it may seem) hopefully hopping down every bunny trail in Scotland looking for a coronation.

Lovers of Celtic history and the Arthurian legend will enjoy The Lost Queen. It’s unlikely to kindle similar enthusiasm from casual readers. Indeed, The Lost Queen would probably make a good movie. But you’d have to cut out or abbreviate about half the story, or it’d take a week to screen.