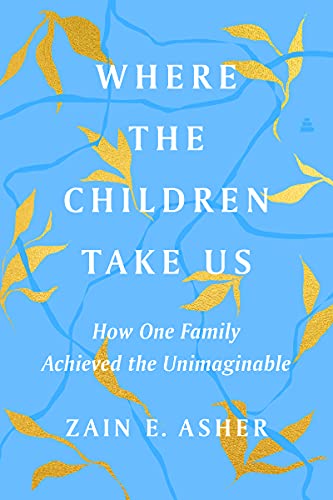 Where the Children Take Us:

How One Family Achieved the Unimaginable

Where the Children Take Us is the compelling true story of two remarkable women, mother and daughter.

One story recounts the life of Obiajulu, the author’s mother. A widowed immigrant from Nigeria, Obiajulu (“my heart is at peace”) raises four children alone in South London while also running a small business six days a week. She is determined to carve out a better life for her children. With remarkable grit, tenacity, and dignity, Obiajulu does exactly that as recounted in this powerful, heartfelt memoir.

The second narrative focuses on the author. Zain is a first-generation African immigrant “raised by a single mother who struggled to keep the heat on in a gritty home in East London.” Via lessons learned from her mother, Zain graduates from Oxford University, earns a graduate degree from Columbia, and becomes a CNN news anchor.

There’s a lot of back story in this well-crafted and absorbing book. It includes how Obiajulu met her husband, Arinze, the love of her life, as a young teen in a tiny village in Nigeria. It includes a harrowing account of the Nigerian civil war and how Obiajulu and her family narrowly escape both famine and genocide.

“Obiajulu had managed to earn the highest academic honors after living through unspeakable bloodshed; she had passed her pharmacy exams while working part-time and raising two young children. If she could do that, then her daughter could certainly do this.”

Brimming with warmth and wit, Where The Children Take Us is a stirring and inspirational memoir of epic proportions. Readers will be quickly and expertly drawn into this fast-paced, riveting read. It’s almost as remarkable as the two women it chronicles. Almost.

Kimber: Mom’s favorite part? Obiajulu is determined to get her daughter into Oxford. Convinced that Zain’s grades are suffering as a result of too much time in front of the boob tube, Obijajulu literally cuts the TV power cord in half. With a pair of scissors. So no TV. Zip. Zero. Nada. For two years. My kinda lady!

“her (mother’s).. commitment to delayed gratification and extreme discipline, had saved her life as a child and seeped into every aspect of her parenting style. She was more than willing to ask us to live without heat, sufficient sleep, or television is that was required to live a better life someday.”

Thanks to her Mom, incidentally, the author’s home became “basically a glorified library with bedrooms.” “Hey!” says Kimber the Magnificent. “That sounds like our house!”

Life is either pay now or pay later, but if you pay later, there’ll be interest.

“The girl from the village, who had escaped genocide, bomb blasts, and starvation, had a daughter going to Oxford.”

When Zain’s acceptance letter from Oxford finally arrives, we wanted to stand up and cheer! You will, too.

“It was because I had done the unimaginable. I had every excuse to fail: I’d lost my father; I had a mother who was badly overworked; I’d bounced around half a dozen schools; and still, I had done it.”

There’s so much strength, resilience and grace reflected in these pages, the author’s tribute to her mother. Because, you know what? You never know where your children will take you. Like:

“My mother taught me so much about success in this world, so much about work and discipline and sacrifice, but her ability to stay in love with my father through unimaginable suffering may have been the greatest lesson of all.”

2 thoughts on “‘Where the Children Take Us’: Moving & Memorable”