“Well. That’s two hours out of my life I’ll never be able to get back” grumps Her Grumpiness. “What a hunka junk! And to think I coulda been playing Canasta! Or watching cheese grow mold!”

Remember that iconic Joni Mitchell folk tune from yesteryear, Both Sides Now? Sung by Judy Collins, the song’s “bittersweet lyrics” portray “the duality of human experience.” Along the same lines, All Sides Now seeks to describe a life “steeped in duality and balance” via a mildly interesting collection of personal essays on a wide variety of topics.

That’s what I said in my Reedsy/Discovery review. Here’s what I really think: 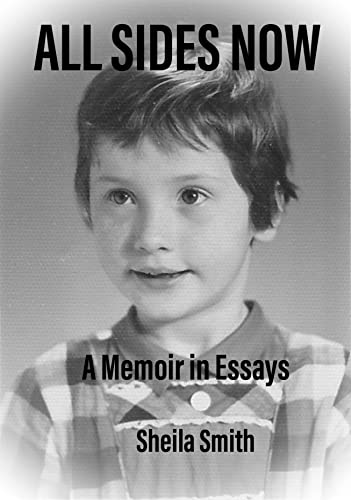 They Can Be Tricky

Memoirs can be tricky. In order to be read-worthy, the author must establish a link of shared experiences or a light bulb moment between writer and reader. Memoirs navigate a mine field of “Who are you and why should I care?” To clear a path forward into relevance and relatability (new word I just made up), a “memoir” should include something bigger than the writer. Something transcendent that’ll resonate with others.

Unfortunately, All Sides Now is so self-absorbed and ingrown, the star and sole performer is Me, Myself and I. The audience isn’t given a second thought. It’s all downhill from there.

Now there’s a stroke of genius. Gag me.

Curiously, it sometimes seems as if two different people voice this memoir. The first part comes across as academic. Almost clinical. As dry as burnt toast, it radiates all the personality and warmth of the Polar Ice Caps. The narrative thaws later on and picks up some warmth and freshness.  Whether or not readers will stick around for the latter is open to question. (I’d bail out early ‘fize you. Just sayin.’)

The narrative seemingly can’t resist taking pot shots at the other side of the political aisle. The chapter entitled “I Dream of Donald,” in which the author relates a dream about meeting the former president in the White House, is bizarre. And as predictable as tomorrow’s sunrise. Yawn.

Observations and conclusions teeter between brilliant and almost childish. Per the latter: “The strong bond between us (twins) is what brought us to our adulthood happy ending. Twins are forever!” A masterful grasp of the obvious is demonstrated with statements like, “A profound psychological shift occurs between being a child and having a child.”

The biggest problem with this book – besides being badly overwritten and so strident it could double as filler for Vitameatavegamin, without the laugh track? That it’s fallow and disjointed? That chapters are tossed together like they were poured out of a blender? It’s boring. Think Snoozeville on steroids.

The format is also problematic. Most “memoirs” follow a definitive chronology of events or a specific timeline. Not this hunka junk. Events and experiences from growing up/childhood years slam in and out of events and experiences from college years and adulthood like a Novak Djokovic ground stroke at Wimbledon. Chapters are loosely arranged by topic, not time frame. But who’s counting?

Also, there’s a lot of “And your point is…?” in this book. Cuz, it doesn’t really have one. Aimlessly nattering from one “Who cares?” topic to the next while knitting together some nominally interesting observation with the frequency of Hailey’s Comet doesn’t really count.

Worse, All Sides Now turns out to be a misnomer. It’s more of a lop-sided collection of obtuse essays that make the Titanic look balanced. Moreover, when the author uses “memoir” to take pot shots at the other side of the political aisle, it’s probably time to abandon ship. And ask for a refund.

Indeed, the only thing more barf-worthy than a supercilious, cynical memoir is a vapid one. This is both. Double barf.