Ever get a whiff of skunk? You don’t need to get close. One whiff is Plenty. (Don’t ask how I know that.)

We try to approach every book with an open mind. Give it a chance. That being said, it doesn’t take us long to smell out a stinker. (We don’t look for this stuff. It finds us.)

When we can, we pass our 100% unscientific, totally subjective “olfactory discoveries” on to you. No extra charge. Consider it a Public Service Announcement.

So here’s our newest list of literary skunkers and clunkers. Three topped our most recent DNF (Did Not Finish) list. Here’s why: This barf-fest opens with Nancy aboard a Liberator poised to parachute into France. She’s supposed to meet up with the Resistance. The pilot tosses her a spam sandwich, heavy on the mayo. Nancy eats it. Then it comes back up all over the floor of the plane. It’s all downhill from there, with needlessly graphic details of torture, mayhem, and murder.

An ex-Los Angelino and online entrepreneur leaves the States, drops out of “civilization,” travels the globe and becomes a world class cynic. After losing most of his online income, he heads to Croatia and lives off the grid for a whil . There, he hikes, “wild camps” and writes a book about it.

Told in the first person, the book’s itinerary features frequent check-ins at Camp Surly, Sullen, and Supercilious. Repeat off-ramps into Women Are The Scourge of the Earth. Detours into Too. Much. Information regarding personal hygiene. Stops at Whinefests and Complaints R Us!

Yea, verily. If climbing Mount Gloom was an Olympic Sport, this book would bring home the gold. It makes Eeyore look like Mr. Happy.

We bailed after 17 chapters. Why hang any further with Captain Kvetch and the Curmudgeons?

If we want that, we’ll tune into the News. 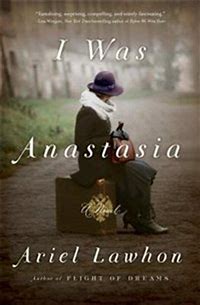 Ever try to track a winter rabbit over a snowy field, barefoot and blindfolded? That’s what trying to follow the “dual narrative” of this historical fiction novel is like.

It’s all over the place.

Anastasia is supposedly about Anna Anderson’s claim to be Anastasia Romanov—sole survivor of the murder of the czar’s family during the 1917 Bolshevik Revolution. It’s really about one bunny trail after another going down the rabbit hole, barely drawing breath in between and ever more barelier (new word I just made up) connecting the tracks.

And that’s too bad. Cuz this book had potential regarding one of history’s greatest mysteries – was she an Imposter or the Real Deal? Doubtless the ending is supposed to be clever. But it’s merely smug. Thud.

This was a book club selection. So we read the whole enchilada. All 613 pages (large print). Here’s our synopsis:

After racking up enough poor choices to win gold, galactically under-prepared and embittered female 20-something makes another: hiking the Pacific Crest Trail solo.

Or how ‘bout we just cut to the chase with: How NOT to Hike the PCT?

Our whole book club raved about Wild. Except one person. (Guess who that was. C’mon. Guess!)

An avid hiker since just after the discovery of fire, Mom figures anyone who can’t properly size a hiking boot or put down a horse humanely has no business writing a book about either. Bye!

Throwin’ this in for free (we’ve read them all):

A Walk Across America, and The Walk West. Both are by Peter Jenkins.

The Road Unseen, co-authored by Peter and Barbara Jenkins.

Southbound: Adventures on the Appalachian Trail, and Walking Home, both by “the barefoot sisters.”

A Walk in the Woods: Rediscovering America on the Appalachian Trail, by Bill Bryson. (The 2015 movie was terrible. But the book is highly readable.)

Have you read any skunkers or clunkers lately?

WARN US in the comments section!