Calling all fans of historical fiction and anyone else who can fog a mirror!

Today we’re reviewing three outstanding novels. They’re all historical fiction. All are set during World War II. Anchoring these narratives are strong women who survive and flourish against the odds.

Mom says The Nightingale and Cilka’s Journey are two disturbing but outstanding reads. And that The Things We Cannot Say is one of the year’s best. (And she reads alot. When she’s not out walking with me.)

Taken together, these three novels may represent the “gold standard” for historical fiction.

So sit tight and get ready to dive in.  Let’s go! 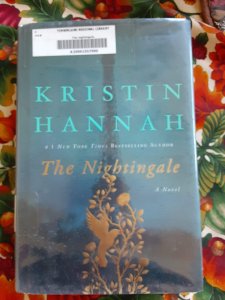 I’ve tried to come up with an apt way to summarize this gripping historical fiction novel. These five words are the only ones that come close.

Set largely in German-occupied France during World War II, The Nightingale is the taut, riveting story of two sisters, Isabelle and Vianne Rossignol. They’re as different as two people can be. When the Germans invade France and occupy their village, both women fight their own war, in their own way.

Vianne is reserved, dutiful, and taciturn. Her husband is a POW. In war-torn France, she is forced to choose between The Impossible and The Unthinkable to protect her family.

Her younger sister Isabelle is mouthy, reckless, “and almost too beautiful to look at.” Willful and passionate, Isabelle joins the French Resistance.

Completely absorbing, The Nightingale quickly pulls you in and immerses you in a spellbinding tale of survival, loss, and love. It’s also exceptionally well-written.

You can almost feel the sting of blinding ice and mind-numbing exhaustion as Isabelle crosses the Pyrenees while smuggling downed Allied pilots out of occupied France. Likewise, you can almost can see the scraps of weathered fabric fluttering from Vianne’s backyard tree, stark reminders of lost loved ones. Ditto gnawing hunger and the smell of fear on every street corner. It seeps through every door, invading every whispered conversation and furtive glance.

“Trust no one.” And whatever you do, don’t fall love.

Heartrending. Searing. Epic. This novel sheds light on a part of WWII history that’s seldom seen: the women’s war. It is perhaps the most powerful historical fiction novel I’ve ever read. Indeed, The Nightingale may well be the gold standard against which all future historical fiction is measured. A towering achievement.

Fifteen years at hard labor. In a Siberian gulag.

That’s the sentence for 18 year-old Cilka Klein, an Auschwitz survivor who did what she had to to survive the other place. After being liberated from the death camp by the Russians, Cilka joins thousands of others in Vorkuta Gulag, a grim and notorious prison camp above the Arctic Circle.

So Cilka doesn’t believe in miracles. Or love. Or anything. But then…

Cilka’s Journey picks up where Morris’s prior novel, The Tattooist of Auschwitz, leaves off. Readers will occasionally meet Gita and Lale in Cilka’s Journey.

Cilka’s gulag story as well as her back story are skillfully interwoven throughout this poignant and searing novel. Also included are a Note from author Heather Morris, Additional Information, and an Afterword delving further into Stalin’s Gulag system.

Based on the powerful true story of love and survival, top notch writing undergirds a gripping story of determination and courage in the face of overwhelming odds, where every day is a battle not just to live but to retain one’s humanity. Reading along, you can almost feel “the relentless, bone-chilling cold, the constant flow of sick and injured and dead prisoners, the rapes she again endured, the humiliation and pain of being imprisoned there, after the other place.”

Reminiscent of a Aleksandr Solzhenitsyn’s One Day in the Life of Ivan Denisovich, Cilka’s Journey is a haunting, harrowing read. It’s not to be missed. L’chaim.

The Things We Cannot Say is more than another historical fiction novel set in World War II. Much more. Swirling throughout the plot are strong currents of mystery and intrigue. A secret lurks between the pages. A secret that’s been buried for more than 70 years.

Deftly shifting between past and present, the story unfolds through alternating timelines a la two main characters: Alina and Alice.

Alina is a teenager in occupied Poland struggling to survive on the family farm as the invading Nazis tighten their deadly grip.

Alice is a modern-day American wife and mother. She has an aloof mother, a detached husband, an autistic son, and the weight of the world on her shoulders. But she has a special connection with her Polish babcia (grandmother), Hanna.

Recently admitted to the hospital with a stroke, Babcia (grandmother), hasn’t been back to her Polish homeland since the war. Babcia’s communicative abilities are limited due to the stroke. But she’s pining for her homeland… and something else. Something Alice can’t quite understand or unravel.

Alice winds up in the tiny Polish town of Trzebinia at the behest of her babcia. But what is Alice looking for in Hanna’s hometown? And why is Babcia so insistent? Can Alice unravel a mystery from the last century before it’s too late?

Sometimes you have to smash the damn door down.

Expertly written, The Things We Cannot Say is about more than the war. It’s about family and friends. Ties that bind. Loyalty and loss. Grief and gratitude.  Suffering and sacrifice. Unimaginable hardship and deprivation. Resilience and redemption. A dreidel. Babcia. Fitting the pieces together. A hill above Trzebinia. Laughing green eyes. A tiny leather shoe. How “Not even the worst of humanity can stamp out grace or hope or love.”

This haunting story of loyalty, sacrifice, and undying love adrift in a sea of pathos has more loops than the Medusa at Six Flags. Propelled by a high octane narrative and three generations of fiercely independent and courageous women, it’s also deeply moving. Bring tissue.

“Our love is bigger than this war – I promise you that.” – Tomasz to Alina

One of the year’s best. Moje wszystko.