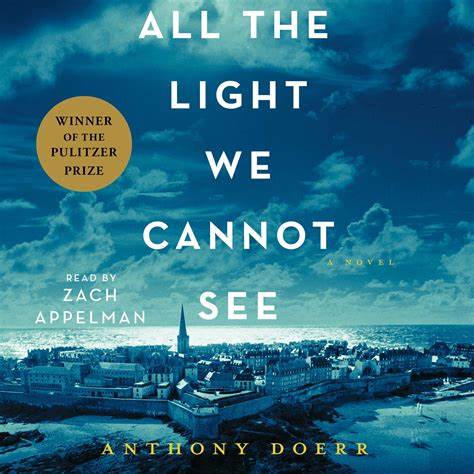 True-ism: We’re not big fans of “Winner” books. Mom and me, we’ve been around long enough to realize that politics and too much other non-bookish stuff goes into handing out those kinds of awards. We don’t do auto-impress just cuz something has “prize winner” attached to it.

This “Light” book, we’re not sure about yet. Finished it the other day. Didn’t exactly love it. But we didn’t hate it, either. We’re somewhere in between. Like….

All the Light We Cannot See is hard to describe. It’s a prodigious tome, weighing in at a hefty 530-pages. The story is the kind that rolls around in your head for days.

The book opens in August 1944. Printed leaflets rain from the sky over the coastal city of Saint-Malo, France. They warn of an imminent Allied bombing raid. But sixteen year-old Marie Laure can’t read the leaflets. She’s blind.

Straining for the sound of her great-uncle’s return to their six-story home housing a clandestine radio transmitter, Marie Laure realizes the footsteps she hears aren’t her Uncle Etienne’s. They’re those of a German soldier she’s met before. He’s in search of a legendary jewel. Is it the gem her missing father hid in a specially constructed wooden model of the neighborhood, one of his last birthday gifts to her?

Hiding in the attic with her great uncle’s radio, Marie Laure reaches for the microphone and begins to read aloud from her Braille copy of Jules Verne…

Meanwhile, a German teenager is trapped beneath the fallen rubble of a hotel. He and his sister, Jutta, are orphans. As youngsters, Werner finds and repairs an old radio. The siblings delightedly discover they can pick up broadcasts about science and natural history and music coming from somewhere in France. The broadcasts always close with a piano composition by Debussy.

But when Werner is inducted into the Hitler Youth, his mechanical genius is used to ferret out and crush pockets of resistance. He eventually winds up in Saint Malo just as Allied bombs start falling. Buried under rubble and struggling to survive, Werner fixes his wrecked military radio. Coming through his headset is the clear voice of a young girl reading a book, followed by Clair de Lune…

There’s much that transpires between Marie Laure and Werner’s early years and August 1944. How Doerr, a formidable talent, patiently and dexterously unravels this complex story is worth the effort. The story jumps back and forth between Marie Laure and Werner and different time frames for both characters. This could quickly turn into a jumble of confusion in the hands of a lesser talent. But Doerr generally pulls it off (as long as you stay alert).  Indeed, the characters the author enlivens with rich and vivid prose live just beyond the grasp of the familiar.

The Sea of Flames

This supple story chronicles countless facets of the human heart through a broad range of characters and contexts including ornithology, marine biology, art, and natural history. We see that some hearts are clear while others are as included as the storied diamond they seek. All roll around in your head like a haunting moonlit melody.

That being said, the main problem with this book is that it’s just too long. It’s a tiring , somewhat tedious read. So we’re scoring it accordingly.

2 thoughts on “Between The “Light” We Cannot See”