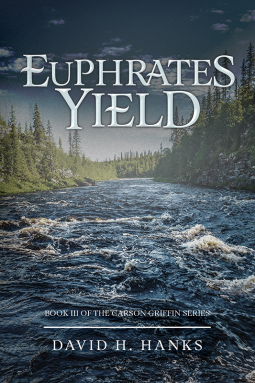 The third and final installment in the Carson Griffin series, Euphrates Yield tries hard to be a Tom Clancy-esque mystery thriller and spy/espionage story with a high octane kick.

It falls short for several reasons.

Recently widowed Carson Griffin has uncovered evidence of a clandestine nuclear program in Syria. The UN Security Council wants him to infiltrate and neutralize the whole shebang in this complicated, high stakes game of cat and mouse. Carson is a specially trained INWA inspector and covert op guy reminiscent of Clancy’s Jack Ryan or Ludlum’s Jason Bourne. Or maybe Superman. Except when Griffin jeopardizes both his own safety and his mission by losing control of his emotions. (Curiously, Griffin also seems confused about his deceased wife’s name: “Christy” or “Christie”? Both spellings appear in the book.)

Meanwhile, Russia wants to take care of the problem of continued resistance in Syria and maintain control over oil exports. There’s also a bunch of North Korean henchmen roaming the countryside as well as the Mossad. The entire Middle East is about to go up like a Roman candle unless Carson can find out who’s supplying Syria with nuclear secrets and foil their evil plans. And what’s up with Viola Melkonian?

Acronyms and travel abound in this tangled web of spies, covert agents and double-crossers. The Armenian Secret Army for the Liberation of Armenia (ASALA). OPEC. The Jihad Terrorist Symbol (JTS). The INWA. Kuala Lumpur. Vienna. Pyongyang. The Med. Armenia. North Korea. Interpol. “The woman had no trouble, so she bought a piglet.”

This is an interesting story with lots of potential. But it takes forever to get going. Once it does get going, it can’t seem to find its stride. It veers into bunny trails and White Rabbit chases a little too often. Do we really care how many pushups Carson does in his “athletic underwear”? The entire contents of his seemingly bottomless rucksack? The brand names of every appliance in his kitchen?

The story is badly over-written in places. In Chapter 6, for example, Griffin is met by “three guards dressed in U.S. Marine Corp uniforms” at the U.S. Embassy in Turkey. Why not just say, “Three Marines”? Also in Chapter 6, how do you stow a rifle “nearly out of sight” in a gun rack “behind the desk”? Additionally, when a sentence on page one includes the clunker, “stop their rate of decent (sic) toward the earth,” it’s downhill from there.

Meanwhile, the Euphrates doesn’t come into play until Chapter 14. Hope you left a trail of bread crumbs in prior chapters. You’re gonna need ‘em to find your way back to a coherent plot.

“The woman had no trouble, so she bought a piglet.” Kinda like this book?

Oh, the woman and the piglet quote? It’s a Russian proverb noted in the book more than once. The English equivalent:  You’re asking for trouble, bub. Kinda like reading this book.

I bailed at Chapter 17 when Griffin kills three dogs inside a fighting cage. I don’t care if they’re Rottie/Pittie mixes. You kill dogs in your story, pal, and I’m GONE. As in, not wasting one more minute on this pile of hooey.