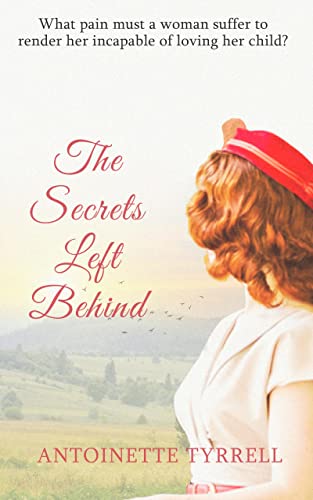 The Secrets Left Behind

This is a story about four women. At first blush, they’re as different as night and day. But there’s more to the story as revealed in this masterful blend of history, mystery, tragedy, regret, and redemption.

To her family, well-to-do socialite Kate Millington is “withdrawn and moody.” With “an aching blackness inside her,” Kate harbors a closetful of hidden resentments. They’re constantly simmering on a slow boil. But “as soon as anyone from outside joined them her entire demeanour changed.”

Alice Millington is Kate’s 25 year-old daughter. An only child, Alice can’t understand Kate’s total and complete lack of maternal love and her frosty detachment from all things Alice-ish.

On her deathbed, Faith Cranston’s adoptive mother makes Faith promise she’ll look for her birth mother. But keeping the promise proves to be more difficult than expected. By about a mile and a half.

Shy, introverted, and single, Nancy Canning is convinced her facial birthmark is a punishment from God for sin. After all, isn’t that what the nuns said at the orphanage? And what’s in the piles of letters that has Nancy so upset?

Hugh Millington, Kate’s husband, is arrested on manslaughter when Kate dies after falling down the stairs during a party at Hatchwood House. The couple was heard arguing just before the fatal fall. But is Kate’s death manslaughter or something else?

There’s also “something wrong” at St. Patricks, the orphanage that features prominently in this story. Sister Imelda clearly knows more than she’s saying. But what? And what’s up with the Hatchwood House housekeeper, Mrs. Brayton? Can the scattered remnants of a broken family be put back together, or will the truth shatter them all?

As the manslaughter trial looms large, ghosts from the past swirl around Kate, Nancy, Faith, and Alice. Clues surface as the author skillfully pulls back the veil covering the past. Somnambulant secrets slowly emerge from their deep slumber spanning three decades and two continents.

Meanwhile, the narrative follows the intensely disparate but interconnected lives of four women via four different points of view. Full of power and pathos, the plot takes us on a mysterious journey into the past in order to unlock secrets of the present. It’s a riveting ride. Heart-rending. And yet, it’s somehow triumphant, too.

Tightly written and enlivened with full-bodied characters, vivid settings in mostly Ireland and London, and realistic dialogue, The Secrets Left Behind will keep readers on their toes and at the edge of their seats in this powerful page-turner as it races toward a shattering crescendo.

“Antoinette’s dream in life is to be paid to read books but as a close second, she’s happy to write them instead. She studied English and History at NUI Maynooth, followed by a career in public relations. Her debut novel, Home to Cavendish, was published by Poolbeg Press in 2019, the same year that Antoinette decided she’d had enough of 9 to 5 life and endless commuting.

Her decision to set up her own writing consultancy coincided neatly with the start of a global health pandemic but despite some setbacks, she has established herself as a successful business and ghost-writer. She recently moved to the Costa Blanca with her partner Ahmed. True to her Irish roots she spends most of her days convinced that it is going to start raining, any minute now.

The Secrets Left Behind, her second novel, is a multi-layered tale of the savage severing of maternal ties, a crumbling marriage built on conjecture, and the devastating impact on the next generation of women. It is set against the backdrop of the patriarchal regime once imposed by the Catholic Church in Ireland and spans the period from 1952 to 1981.”

2 thoughts on “‘The Secrets Left Behind’ Will Leave You Breathless”