Our ‘best girl,’ Eve, passed away on December 19, 2013. This post and its follow-on, Christmas, EVE, were the two highest rated posts of the year. Both posts plus much more are in my new book: Forever, Eve.

“Animal lovers are a special breed of human, generous of spirit, full of empathy, perhaps a little prone to sentimentality and with hearts as big as a cloudless sky.”

Her name was Eve. And she was more “human” than most people.

Our first dog and the only other female in the family, “Eve” seemed a natural when considering names for our purebred yellow Labrador retriever. She came into our lives at age three, a “cast off” from a church friend who worked long hours and had “no time” for a dog who “needed people to be happy.” Eve stayed for more than eleven years.

My four sons grew up with her. Romped through the woods together. Splashed in the river. Swam in the lake. Hiked the hills. Played cowboys and Indians. Robin Hood and his Merry Men (it seemed Eve was inevitably assigned the role of Friar Tuck, which somehow seems fitting). We took her just about everywhere: camping trips, Mount Rainier, picnics, reunions, baseball games. Forest, field and vale. “Hi Evie!” I chirped every morning. “How’s my best girl?” She returned the salutation with a cheerful tail thump.

The color of toasted marshmallows with the personality of Pooh Bear, Eve thought everyone was her best friend. She loved everyone equally and well. Eve brought out the best in and thought the best of everyone. She was loyal, loving and generous. Protective. An eternal optimist. She couldn’t wait till I arrived home and danced a canine jig every time I walked in the door. She would quietly pad into my study and plop herself down on the carpet next to my desk, keeping me company as I read and wrote and worked. Even when every other family member scattered to the four winds with work, school, sports or other pursuits, I was never alone. There was always Eve. Forever, Eve.

My good dog seemed to know whenever I was stressed, ill, upset, or otherwise out of it. She stuck to me like crazy glue, refusing to leave my side. Eve also stuck with me through moves and new neighborhoods, injuries, surgeries, job losses, birthdays, and graduations. Funerals, weddings, Christmas parties and kid illnesses. She was my faithful companion over hundreds of miles of trails and hikes, with an uncomplaining, “just-happy-to-be-here, thanks-for-bringing-me-Mom” attitude. 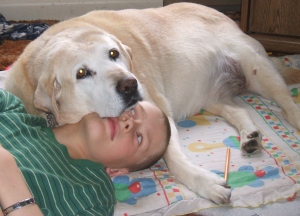 “Lady With The Lab”

I’m told that I was known around town as the “Lady with the Lab.” I suppose it’s true. When my boon companion was younger and more spry, I rarely went anywhere without her – either by vehicle or on foot. Eve was my faithful companion on long morning walks and strolls on the beach until increasing age and arthritis caught up with her. No longer able to climb the stairs to son Nathan’s upstairs bedroom, her preferred sleeping quarters, Eve settled for a warm blanket and a cozy dog bed near a living room heating vent.

The last year of her life, Eve was unable to navigate the thirteen steep steps in and out of our house. So she trained my teenage sons. Seriously. She barked whenever she needed to go out or come up. And they carried her.

When Eve’s fourteen-plus years caught up with her, she deteriorated quickly. It was shocking how fast she faded. She refused food, including her favorite doggie treats. Stopped barking altogether. Could barely manage a feeble tail thump when I entered the room.

“She’s an old dog” the vet said, demonstrating a masterful grasp of the obvious. “She doesn’t have much longer.”

“No. She’ll probably just go to sleep and not wake up. Or I could put her down.”

I shook my head, unable to bear the thought of artificially hastening the imminent. Husband Chris didn’t argue. Eve was always “my” dog more than she was anyone else’s. It was my decision.

“As long as she’s not suffering,” I murmured, “I want her to die at home, surrounded by everything and everyone she loves. Not in some impersonal, sterile vet clinic.”

We kept her as comfortable as possible, often waking in the wee hours to tip-toe out to her dog bed and check on her. Relieved at the shallow but rhythmic rise and fall of her chest, I crawled back into bed or sat and talked to her, scratching her ears and rubbing her belly the way she loved.

The morning of December 19 yawned chill and charcoal gray. Frost feathered rooftops. Lawns wore ice pajamas. I spent most of the morning coaxing liquids into Eve. Adjusting her blanket. Stroking her tawny blond coat. I knew it wouldn’t be long. “You are a good girl, Evie, and I love you. We all do.”

Domestic duties called and I retired to the kitchen. Less than an hour later, son Nathan (21) came into the kitchen with, “I think Eve is gone.” I dashed to the living room, hoping against hope for any sign of life. A pulse. Breath. Anything. There was nothing. She was limp but still warm. And completely, undeniably gone.

The kindest, gentlest soul I’ve ever known, Eve passed away peacefully in her sleep a few days before Christmas.

The season isn’t the same without her. Those who’ve never lost a pet can’t understand. Those who have need no explanation.

“She was always your dog,” Chris said as we gently lifted Eve’s lifeless body into our van for transport to the pet cemetery. “Good girl” I whispered upon arrival, stroking the noble golden head and back in a final goodbye. I removed Eve’s collar and tags and slipped them into my pocket. It was some time before I could bear to leave her.

Some losses are too deep for tears.

An anemic sun dumped dull rays out of a flannel-gray sky as we arrived home to an Eve-less house – for the first time in more than a decade. Thick as a chocolate milkshake, memories poured out of every corner. The house seemed eerily empty and unnaturally quiet without the welcoming bark of my ‘best girl,’ the jangle of her dog tags. The ears pricked at the sound of my voice. The warm amber eyes following my every move. Her black licorice nose gently butting me for attention.

A frosted moon necklaced the Olympic Mountains as I offered a quiet prayer of thanks for the truest friend I’ve ever known.  A few hours later, a thin white fleece of snow jacketed the foothills.

I still can’t stand to see or hear dog commercials. I avoid the pet care and dog food aisles. I woke more than once in the pre-dawn gloaming today, thinking I heard her voice. Sometimes I catch myself straining for a “good morning” bark, the flash of a tawny tail.

Evie is gone. And so is a large chunk of my heart.

It’s hard to describe the heart-hole left by the loss of a well-loved pet. But then, Eve wasn’t a pet. She was never “just a dog.” Compassionate, patient, loyal, and selfless to the end, Eve was a palomino sirocco on four legs. A member of the family.

Shortly before her death, I knelt next to her and told her the truth, Marley-esque style. “Eve,” I whispered, “You are a GREAT dog. You are The Best There Ever Was.”

John Grogan put it this way:

“A dog judges others not by their color or creed or class but by who they are inside. A dog doesn’t care if you are rich or poor, educated or illiterate, clever or dull. Give him your heart and he will give you his.”

I did and Eve did. Her heart was indeed “as big as a cloudless sky.”   Eve was more “human” than most people – and our lives are better and brighter  for having held her in our hearts. Forever.  She truly was The Best.