You don’t have to say it. I know I’m beautiful. Also shy, modest, and retiring.

Kimber here with another edition of Fine Wine Fridays. (I was holding out for Excellently Scrumptious and Splendiferous Book Lists That Are So Delicious, They’re Even Better Than My Fave Dog Chow or Squeaky Toy. Mom nixed that. Ugh.)

Anyway, today we’re highlighting books set in exotic locales or other continents. So if you liked Peter Pan or Narnia, you may like… Oh, wait. Scratch that. These are set in real places, not Neverland or Aslan’s Country (Mom, you are no fun!)

Wait. Where was I?

Oh yeah. Fun, interesting, engaging reads in other settings. Some titles are old. Some are new. They may be even better than my squeaky toy. (But I’m still holding on to it. Just in case.) So here, in no particular order, are: 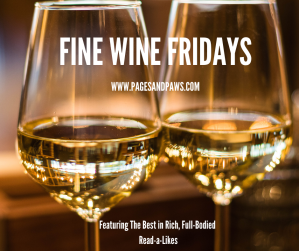 A touching tribute to an unsung hero of the race for the South Pole in the early 1910s.

If you’re familiar with the epic race between the triumphant Norwegian, Roald Amundsen, and the Englishman Robert Falcon Scott, you know how the story ends. Lawrence adds a new twist. He tells the story of Scott’s ill-fated polar expedition through the eyes of one of 19 ponies brought along on the expedition, a “plucky little animal” named James Pigg.

Set in London and Paris before and during the French Revolution. The novel tells the story of the French Doctor Manette, his 18-year-long imprisonment in the Bastille in Paris and his release to live in London with his daughter Lucie, whom he had never met. The story is set against the conditions that led up to the French Revolution and the Reign of Terror

Thowra, the magnificent silver stallion, is king of the brumbies. But he must defend his herd from the mighty horse, The Brolga, in the most savage of struggles. That is not the only danger. Thowra needs all his speed and cunning to save his herd from capture by man. Set in Australia.

Evocative and compelling, Born Free is the remarkable true story of Elsa, an orphaned lion cub raised by Joy Adamson and her husband, George, in Kenya.

At its core, Born Free is a love story. With great sensitivity and precision, Adamson chronicles the mutual affection and bond between a magnificent lioness and the humans who loved her enough to set her free.

From Denmark to Kenya and back again. A classic.

What is family? is at the heart of this story. It takes readers to the sugar-white sand beaches of Hawaii and Diamond Head, San Francisco and the World’s Fair, and a backyard shelter during the 1941 bombing of Pearl Harbor. We eventually wind up in Sunnyvale and then San Jose, California.

Yuri Zhivago is a young doctor with a mild interest in the coming conflict and a general interest in literature. The plot develops as the lives of Yuri and his friends crisscross with those of Pasha Antipov, a Red commissar, and Amalia Guishar, the French widow of a Russian engineer. It is her daughter, Lara, whose connection with Yuri becomes the background and focal point of the book’s deeply moving love story set in Russia.

Set during the 1941 siege of Leningrad. Think Doctor Zhivago (above) meets West Side Story. Only hungrier. Hauntingly beautiful.

Travel to London and India on the trail of mystery and murder along with jewelry historian Kate Kirby.

Our full review will be available here next week.

Abby Welles has a crisis of faith after her twin sister dies in a car wreck. She heads to Mexico seeking Destiny man and some answers. But evil stalks her every move…

Check out our review.

Published in 1931, The Good Earth dramatizes family life in a Chinese village in the early 20th century. It is the first book in Buck’s House of Earth trilogy. As best-selling novel in the United States in both 1931 and 1932, it won the Pulitzer Prize for Fiction in 1932, and was influential in Buck’s winning the Nobel Prize for Literature in 1938. Buck grew up in China as the daughter of missionaries. She wrote the book while living in China, drawing on her first-hand observations of Chinese village life.

Check out our full list of Fine Wine Fridays.